A protest on Tuesday brought famous London high street Oxford Street to a standstill for a number of hours, as black cab drivers in the capital made a stand against Transport for London bosses to raise awareness of the industry’s recent struggles.

Hundreds of the iconic black cabs lined the street as part of a pre-planned ‘go slow’ protest, with drivers claiming that TfL has caused a ‘steady erosion’ of their business due to its failure to properly address the problem of unlicensed minicab touts or correctly regulate the industry. Some drivers have claimed that trade has dropped by as much as 30% in recent years. 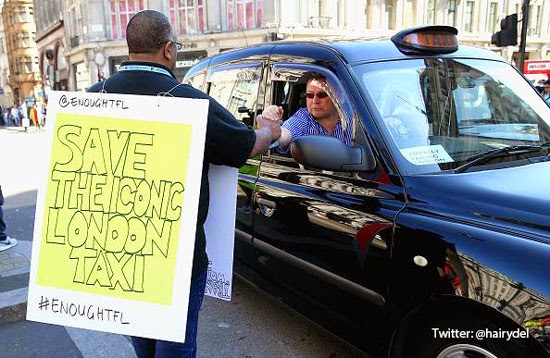 It’s not the first protest that has ground traffic to a halt in London, with over 5,000 cab drivers involved in a mass demonstration in Trafalgar Square last year against mobile taxi app Uber.

However, organisers of this latest stunt – The United Cabbies Group – have insisted that the Oxford Street protest is nothing to do with services such as Uber and Hailo, with the group believing the black cab’s problems and dwindling trade is fully the responsibilty of London transport bosses. United Cabbies Group chairman, Len Martin, told the London Evening Standard that “TfL are desperately trying to deflect attention but this is about their woeful performance. If TfL enforced the law, there would be plenty of work on the streets.”

Martin also stated that there are fewer than 40 transport officers working on tackling the issue of unlicensed taxis in the city, which he claims is resulting in the public being left at considerable risk.

TfL’s chief operating officer for surface transport, Garrett Emmerson, hit back at the protest by describing London’s taxi regulation as “the envy of the world.” He claimed that people approached by bogus taxis at night has fallen by over 50% in the last 12 years, with cab-related sexual offences also falling by 38% over the same period.